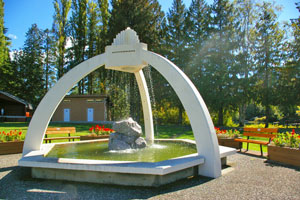 Central Park is located alongside the river in downtown Lake Cowichan off South Shore Road. There is in this park a fountain, picnic tables, outdoor stage, and washroom facilities. The park has a nice green field and a row of fir trees next to the river which provide shade to the picnic tables. The fountain is in honour of Dr. William Carpentier who grew up in Lake Cowichan and was a physician to the astronauts of the Apollo 11 moon landing in 1969. Lake Cowichan's war memorial is located beside the stage. Additionally, a sculpture of a heron shown perched on a stump watches the river flow by. 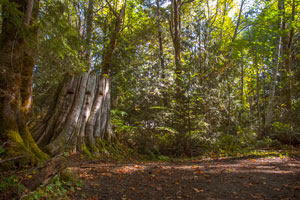 Friendship Park Fisheries Trail is a wooded trail that is located next to the Village Market grocery store on South Shore Road in Lake Cowichan. The path winds along a small creek past Palsson Elementary School. There are several bridges and benches. Friendship park is dedicated to the people of the twin city of Lake Cowichan, Ohtaki, Japan. The park was made possible by the cooperative efforts of many different local organizations. 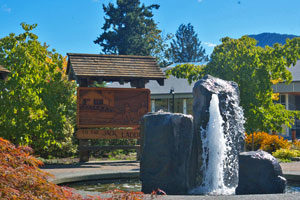 The Forest Workers Memorial Park was built by the Cowichan Lake Community Forest Cooperative to honour all forestry workers. Legacy funds from the Lake Cowichan and District Credit Union funded the major portion of the project with donations from the Forest Co-op, the Town of Lake Cowichan and other forestry companies in the area. Local shrubbery and three yellow cedar carvings depicting different aspects of the forest industry with benches surround the memorial bricks and fountain. This gem provides everyone an opportunity to pay their respects to those who have lost their lives in the line of an honourable profession. 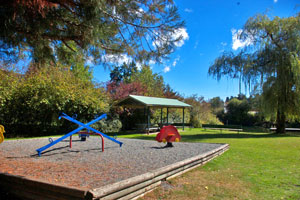 Sponsored in part by the Kinsmen Club, the "duck pond" is located on Park Road off North Shore Road in Lake Cowichan. Here you can take a relaxing dip into the Cowichan River just after it leaves Cowichan Lake. There are floating docks for swimmers, picnic tables, benches and a playground. There are no lifeguards on duty but the river flows quite slowly past the swimming area and is fairly shallow. The newly refurbished "footbridge" can take you across the river into downtown Lake Cowichan. The year 2000 grad tree, a golden deodar cedar (native to the Himalayas), is on the opposite bank in Lake Cowichan as well. 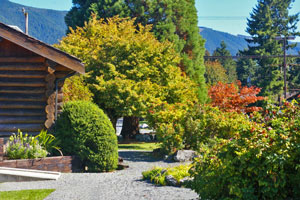 Located at the "foot of the lake" where the Cowichan River begins, next to the tourist information booth in downtown Lake Cowichan on South Shore Road. There is sufficient parking, public washrooms and picnic facilities at this park. The Kaatza Station Museum is in the park as well and offers a look back into the history of the region. The park is named after Vera and Jack Saywell. Jack Saywell was a high school principal from 1937-64. His wife, Vera, was a kindergarten teacher. A plaque under the park's sign commemorates both their contributions in educating area youth. 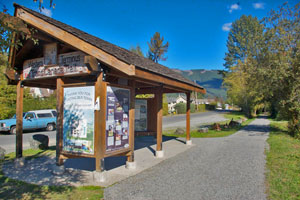 The Trans Canada Trail passes through Lake Cowichan on its route between Nanaimo and Victoria. This section is fairly easy hiking as it runs along abandoned railway lines whose tracks have been removed and trestles have been converted to bridges. Going east the trail runs parallel to the Cowichan River to Duncan and then north to Nanaimo. South it goes west of the Malahat Range to Sooke and then onto Victoria, BC. More information on this section of the trail is available on the BC Trans Canada Trail Homepage. 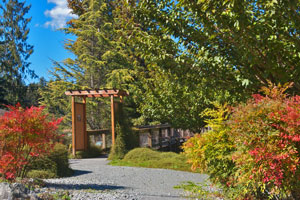 In 1989 Ohtaki, Japan, and Lake Cowichan, BC, became twin communities. This park was created to represent the beautiful relationship that has come to be. Our two communities since have regular exchange programs so that our youth have a chance to experience each other cultures. In this park you will see memories for our community members who have be an extraordinary part of this great twinning. 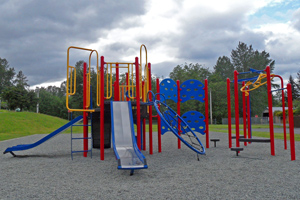 Winter Park is located on Winter Drive in the "Slopes", a development off of Highway 18